It's Twitter's 10th birthday. Since we launched, it's been the most-used channel for us in sharing what people get up to with Artefact Cards. It helps other folk understand what the cards are, what they might use them for. So many of our new customers come our way because they see other people using the Artefact Cards through Twitter. And we've started putting people's pictures from twitter in the newsletter too, which everyone seems to love.

So to celebrate their first decade, until Friday this week (25th March) you can get a very fitting 10% off anything in the shop using lovetwitter as a discount code.

You gotta love that, right? Video: Metaphorical Design Mechanics (why we all use cards to build ideas)

Those lovely folks at Adaptive Lab invited me to give a short talk last month at their inaugural Pi People event over in Old Street.

I talked about why there are so many different card decks around at the moment (culturally, creatively strategically etc), and what's going on when we use cards to create ideas that work on the web - here's the video they've made of the talk:

The second Pi People event is coming up very soon too, which you should totally get yourselves along to - more details here.

These are our glorious all-leather, high quality Field Wallets, as made by Bernard and his family up at Lichfield Leather here in the UK. They really are beautiful, check them out here. 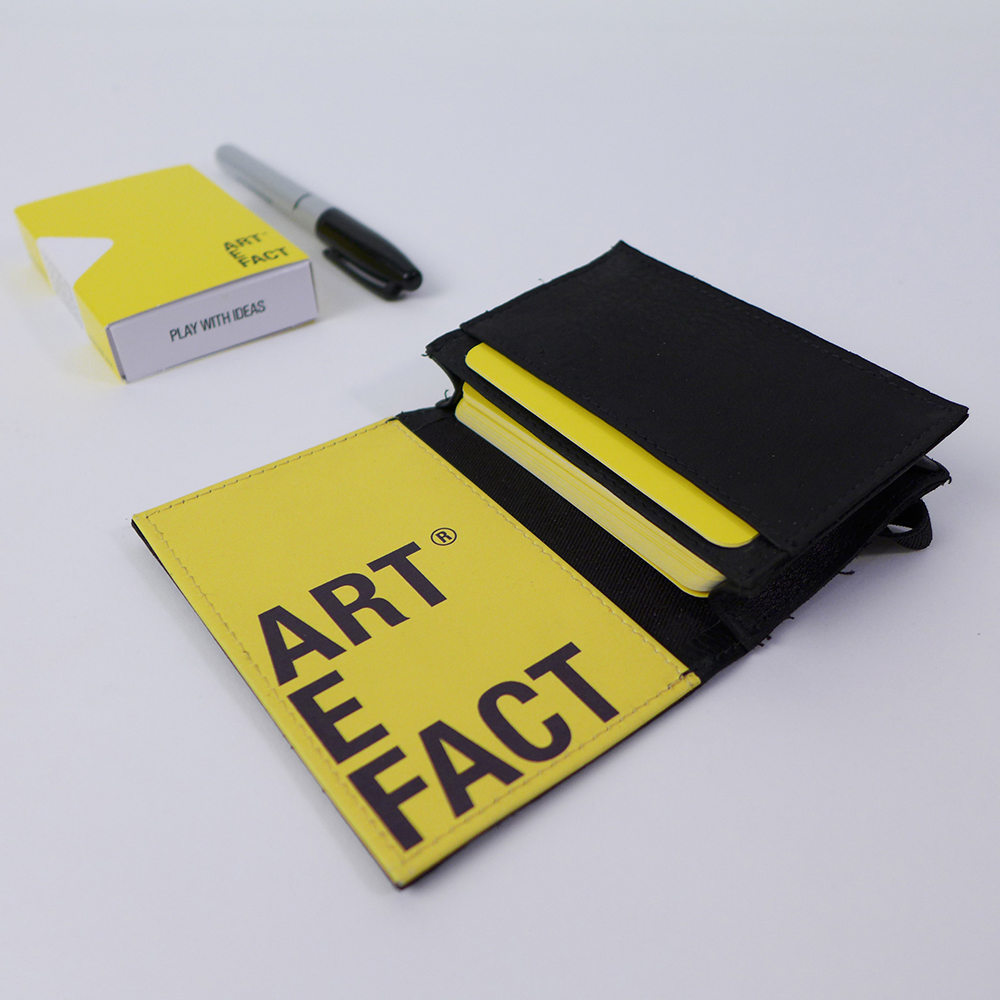 Last year, people asked "can we do custom ones for clients as Christmas presents?", and we said "no, sorry, it's too late". This year, we're letting you know early enough, to avoid disappointments.

When we say 'custom' we mean that you can replace the custom printed yellow leather panel you see below with whatever you like.

As well as the premium leather Field Wallet, you'll also get cards inside the wallet, a box of Artefact Cards to restock the Field Wallet with, and a custom black Sharpie, all inside a clean white presentation box.

We need your expressions of interest by Monday 28th September in order to get them to you by 1st December.

Please email us here with all orders or to ask more questions.

That's Marcus. The talk he's doing in November at the All Facebook Marketing Conference... ...actually, it's clearly not 'a talk', that's a ridiculously low-status description for it... the performance, the experience, the changeover.

I'm on the verge of booking a ticket and a flight over.

What's even more exciting (for me, and maybe you, but really me) is that he's been using Artefact Cards to put the project together. And he's also putting together videos, writings, pictures etc into his creative process as he creates the final show, a starting selection which I've pulled over to here with his blessing...

"I spend quite some time drawing the cards: I get lost in the act of drawing, it’s an immersive experience that helps me work out what an idea is, where it might go and it helps me find better ideas. I’m sure you’re not supposed to spend so much time on each card but I do.

I really want to cards to look good because I want to look at them for ages. I want other people to want to look at them. It’s while trying to make the cards look as good as possible I start seeing the card become a part of something on a stage: I imagine myself doing the card and how people react to it. I also see other cards that I have yet to draw. It’s all a bit potty." One of the best (well, perhaps the best) thing about making Artefact Cards is that they're a platform; they're not just a thing themselves, they help people make other things.

It was brilliant to see yesterday the Cards for Mindfulness launch their Kickstarter - and even better to see they're almost halfway done after just a day. They used Artefact Cards to help prototype the set, and so I asked Rohan to send me some pictures and tell us how they approached it... over to Rohan: We started with the coloured Artefact cards and used one colour per mindfulness exercise 'category'. It was just initially slogans. Nessie, my dog, is the black curly thing in shot! We then wrote more than we needed so we could whittle them down so they could be the best combination, both within categories and also across the whole deck. I then chose the final six per category and then wrote the longer exercise texts which go on the reverse. Based on Artefact, we started also with the idea that cards would be printed on coloured paper and this image represents that. We decided however that that wasn't great for legibility (mainly of the exercise text on the reverse) and so then just used one paper colourway (Colorset Natural). And this is a shot of the cards as they are in the prototype deck. It's really useful to see the evolution of ideas in this way, peering into the process that helps others ship brilliant products. Too often, perhaps, we only perceive things arriving in the market fully fledged, when understanding the development journey can be a big part of the story of the thing. Thanks for sending these over, Rohan.

And the rest of you; get over to the Kickstarter page to watch the video and back the project - https://www.kickstarter.com/projects/rohangunatillake/cards-for-mindfulness.

The guys over at 383 in Birmingham have been working on a terrific thing called 'My Manifesto', which they call "a tool to not only help you steer which way to vote, but to generate a blended view of which aspects of which manifestos matter most to you."

The whole post is worth checking out from a project process perspective, and of course go through My Manifesto itself to see who you are most aligned with, politically. What we love in particular though is the little stop motion video below, using Artefact Cards, just to quickly explain the premise. Nice. We'll be nicking that idea... :)

Every so often, someone shares a project they're working on using Artefact Cards and it makes me think again about all the things that make them work.

Dave Birss did this yesterday, when he casually threw out a tweet saying "Today I'm planning a documentary on St Paul's with Artefact Cards", and included the following picture: They are major plotting points of Dave's documentary, no doubt, each one constrained by the space it has to exist.

I wish I could draw like that. More practice needed, as always.

The main point though is that it's inspired me in another way; to think about documentary making, what it is trying to do, and how it achieves that.

Here's my simple version. A documentary tries to take a wide selection of facts and viewpoints, capture the best in a compelling way, and find the order in which that all makes the most powerful, compelling case to the viewer. I think there's something in that process that can transfer well across to any type of project.

First of all, there's Capturing.

It's akin to running around in the meadow of idea butterflies, which is a thought that Faris & Rosie set off in my head when they referred to our Field Kit as the "perfect present for idea lepidopterists". It's something we often tend to do in one compressed session, either on our own or with a team of others. The tendency is to quickly binge on some specifically gathered source materials, usually during the meeting we should have prepped for.

What I've found really useful is having packs of different collections of Artefact Cards that you add to over the space of 48 hours, or even longer if you have the time. Travelling through different times, spaces and events means that you naturally find different perspectives on things, and therefore vary the sorts of things you think of capturing. What's notable now might be unremarkable tomorrow, and vice versa.

Working in this way means that over the course of a couple of days, you can have a meaty subject deck that varies wildly from what you'd get in one binging session. Collect those butterflies as you go, rather than hope they all turn up in the same hour. Documentaries are often stories that reveal themselves over time, so build that into your process where you can.

Then, when you've got a good stockpile, it's time to work them up a little. It's all about the Crafting.

As we always say, it's good practice with the Artefact Cards to make 'em like you'll keep 'em. They're robust enough to stay around for a long time; not wipeable, or disposable, but keepable. If you've done that as you go, great. If not, try taking the pen back to existing cards, work on them a little, add a drawing, fill out the letters a little. Put some love and thought into them.

(BTW - If you want a little more practice, then follow our Sixty Second Sketches for quick daily drawing tips.) Whatever your approach or style when it comes to working on the cards, in the moments when you're making 'an artefact', there's a little magic that happens. As you work with both hands on crafting something on a small card with a permanent marker, it really focusses your attention on what you're doing. It's the quickest way we know of of entering a state of flow, as the outside world swiftly disappears. As a result, you'll feel yourself thinking more deeply about the subject matter on the card.

If we're thinking in terms of the documentary, then each Artefact Card you make is like a little scene. The way in which you convey the most important part of an idea to the viewer is important. Each of those moments needs crafting if your project is to be a success.

Pretty soon, you should have a collection of ideas that you're really invested in, and seeing them all together will start to unlock more new ideas and connections between the different elements.

Which is where the third part comes in; Directing.

With all the cards laid out in front of you, you can start to build up the story as you want it to flow. Gathering little loops together of four of five cards, moving them around to see where they fit best, swiftly re-editing the project in front of you to find exactly the right order for the project that will let you quickly start making it happen. Because of the effort you've put into the cards at the Crafting stage, you'll have created a significant amount of meaning around each card, especially if you've included drawings as part of the card. This means that it's not just what's on the card that's important, as it's a representation for all the associations you and others have around it.

The more the card is used, the more it gathers new meaning, which is why it's important you view it as something permanent and keepable. One of the biggest advantages of Artefact Cards is that you've created a robust, reusable set of cards that have all your ideas captured on them. You can re-edit the movie of your project as often as you wish, just unpack the box and dive straight back in.

There we have it, then, the documentary approach to working on projects with Artefact Cards; Capturing, Crafting, Directing.

Thank you Dave for sharing your project, and thanks to all of you who share how you're using the cards. It's an endless source of refreshing inspiration, and I thank you all for it. Remember to tweet us @Artefact_Cards so we can don't miss a thing.